“Honour thy father and mother: And: He that shall curse father or mother, let him die the death.” Matthew 15:4

Isabel Diego, my maternal grandmother, was born in Guantanamo, Cuba on April 24th, 1938. She died in Houston, Texas on December 3rd, 2020 after contracting COVID-19. She was 82 years old.

Her father, Enrique Herrera, was a nationally renowned lawyer. He lead the league of Cuban coffee producers and gave pro bono legal advice to the dispossessed in his town. Her mother, Delia Herrera, was a homemaker and family caretaker. Isabel was the eldest of her three sisters - now Delia Brooks, Caridad Campos, and Mayita Puertocarrero. The Herrera family were members of the Cuban aristocracy. They owned a house in Guantanamo, a city in Oriente province on the eastern side of Cuba, and a beach house on the shore of the now infamous Guantanamo Bay. She lived an idyllic life on her beloved island. She was surrounded by friends and family constantly, practiced her Catholic faith rigorously, and thrived in the joyous, lyrical, and gregarious Caribbean culture that she loved. José Martí, the Cuban poet, essayist, publisher, and martyr of the Cuban independence movement, was her idol. Isabel was torn from this place in December of 1959, at the tender age of 21, when Fidel Castro took control of the state. She never went back in person, but she never left it in her mind. I grew up hearing stories about this lost paradise - the great-aunt who ran guns hidden under her hoop skirt to Marti’s revolutionaries in the Sierra Maestre, late nights spent with her father making highballs, and balmy days spent among the crystal clear waves breaking off the white sand beaches of Guantanamo Bay. I never heard any stories about America.

My Grandma was an extremely devout Catholic. She looked to the Church for moral guidance and practiced its social teachings in her everyday life. She was raised in the pre-Vatican II, extremely traditional Cuban Catholic Church. One of her uncles was an important Jesuit priest on the island and she attended Jesuit schools as many of island elite did. The Jesuits’ tradition of intellectualism, care for the dispossessed, and unbending obedience to the Pope shaped her faith deeply. She was a long time parishioner at St. Cecilia Catholic Church on the west side of Houston, where she took part in many ministries. She delivered the Eucharist to the homebound, arranged financial relief for the downtrodden, and donated tons of money to both the parish and outside charities in need of support. She loved praying the Holy Rosary, meditating in Eucharistic adoration, recounting her sins during the Sacrament of Penance, and enjoying communion with our Lord and savior during Mass. Crucifixes filled her home, books on Catholic spirituality lined her bookshelf, and the words of the Pope were on her mind every day. Being the true, unrepentant Catholic that she was, she never failed to mock Protestant practices, complain about how the American Catholic community was infected by this country’s ungodly worship of the almighty dollar, and drink wine to the glory of God. Her faith made her strong.

When I came back to Houston after my time in undergrad I began taking her to mass every week. I had drifted away from Christianity in middle school and was a member of a Buddhist sangha while in college, but upon getting back home I found that attending Mass with my grandmother was the best way for me to support her. After church we always went to eat lunch and hang out, often at Cafe Piquet which was her favorite Cuban restaurant in town. Initially, I didn’t buy into the Catholic dogma that I heard in services. I was just there to support her in her faith. I gradually gained an appreciation for the ritual of the Mass, the beauty of the Eucharist, the radical nature of Catholic social teaching, and the life-giving grace of the act of Confession. Catholicism just felt right to me as I became better acquainted with it, in no small part because my Grandma consciously inculcated Catholic values in me as I grew up. I decided to attend RCIA classes and come back to the Church that I had been baptized into. She was with me for my first communion and sponsored my confirmation into the Catholic family. I am truly grateful for her uncompromising efforts to bring me back to Catholicism. I don’t know how I would be able to handle her passing without my faith.

My Grandma was a startlingly intelligent woman. She attended the University of Havana and Villanova University in Havana before leaving for America. She started out studying dentistry, but switched to chemical engineering later in her college career out of disgust for dissections. Her studies were interrupted by the revolution, and when she came to the States she had no records of her nearly complete college career. They were burned by the communists. She never took a university degree, but managed to carve out an extremely successful career experimenting on mice in academic immunology laboratories. She worked for the University of Texas’ MD Anderson Cancer Center in Houston at the Texas Medical Center and the Barnes-Jewish Hospital which is part of the Washington University Medical Center in St. Louis among other places. She managed some of labs she worked in, and taught students the basics of laboratory medical science. Keep in mind how unlikely this was. Here was an immigrant with a strange accent, lacking a college degree, and a woman on top of all that who managed to work her way up to leading university laboratories conducting cutting-edge research. She didn’t even really like it that much either!

She was diagnosed with bipolar disorder in her 40s, but showed symptoms of the illness since her 20s. She experienced bouts of ecstatic mania and crushing depression periodically throughout her life, often when her medication regime was thrown off course. She was mostly stable during my time with her. My mom told me about a couple of manic breaks she had during my childhood, but I, being so young, did not recognize or remember them. What signs I did see, I likely didn’t think as being odd. After all, manic depression was part of what made her who she was. Ecstatic highs and crushing lows, glowing rage and soul-crushing despair, sweet affection and cutting malice - she pirouetted between these extremities on the timescale of days, weeks, and months. I was spared her very well-known harsh edge, and only knew the sweet, loving, and caring side of her. Only over the past few months was I exposed to the worst manifestations of her illness. A combination of social isolation, worsening dementia, and an insipid change in her drug cocktail knocked her off rhythm. I’m glad that she is free of this malady at long last.

My Grandma was the most important person in my life. I was her golden child. I could do no wrong, and everything that I did was perfect. She never got angry with me, which was unusual in that she could be quite vicious with others if they displeased her in someway. In her eyes I was a genius, destined to do great things and affect positive change on the world.theI was a symbol of all that was good in the world. I think a big reason for why she adored me so was because I reminded her of her father, who she idealized as a perfect person. She bragged about me constantly to friends, family, acquaintances, and even complete strangers. Really, to just about anyone who would listen! Anytime I met one of her many connections (she was a very social woman!), they remarked - “Oh this is the David that I’ve heard so much about!”. She was enthusiastic about my intellectual development, educational achievements, and encouraged me to strive ever higher. She was my biggest fan and supporter, and her constant enthusiasm for anything I was doing gave me a deeply ingrained self-confidence that I carry with me to this day. My relationship with my grandmother was something special, and I wish more people had the opportunity cultivate friendships with their own elders. I’ll miss her for the rest of my days.

I was blessed to grow up with my her close at hand. For my first two or three years of life, she lived in a mother-in-law apartment in the backyard of our family home off Shepherd. She helped raise me since birth. Even when she didn’t live with us, she was in an apartment in town so we were always in close contact. I would say that I saw my Grandma close to bi-weekly for the whole of my 23 years on this Earth. She was a constant source of joy and wisdom for me to draw on. She taught me many important lessons about the world and shaped my thinking like no one else. I don’t think I can explain the specifics of these lessons, since they are so deeply embedded in the way that I live. The ineffable, the indescribable, the unconscious - that is that is sacred. And what she taught me was certainly that. One thing I will point to is that my love of history, in all its forms, was sparked by the lazy afternoons I spent listening to her weave me tales of the Cuba, a place both exotic and intoxicatingly close. I’m so grateful for all the time that we were able to share. I’m glad that I stayed in Houston to be around her as much as possible. She was my best friend and a part of my being. I told her the about the important things in my life, and she reciprocated. I loved her more than anyone in this world.

These are but the smallest glimpses of who my grandmother was. I can’t convey her wry humor, biting cynicism, or patrician sense of noblesse oblige properly. I can’t send the sly winks, critical stares, or wild gazes that made her eyes the most powerful part of her person. I can’t share her exquisite taste, in fashion, art, and interior design. To try to capture the complexity of any human being in words alone (and in one post!) is an impossible task. Especially when that person is close to you as my Grandma was to me. I have much more to say about her, but I hope that I gave you some sense of who she was and what she meant to me.

I feel her with me in spirit, and will carry her in my heart until the day that we see each other again. I would appreciate any and all prayers for the soul of my dearly departed grandmother, and for our family as we mourn and celebrate her life and ascension into Heaven. May God give her rest.

“And God shall wipe away all tears from their eyes: and death shall be no more, nor mourning, nor crying, nor sorrow shall be any more, for the former things are passed away.” Revelation 21:4 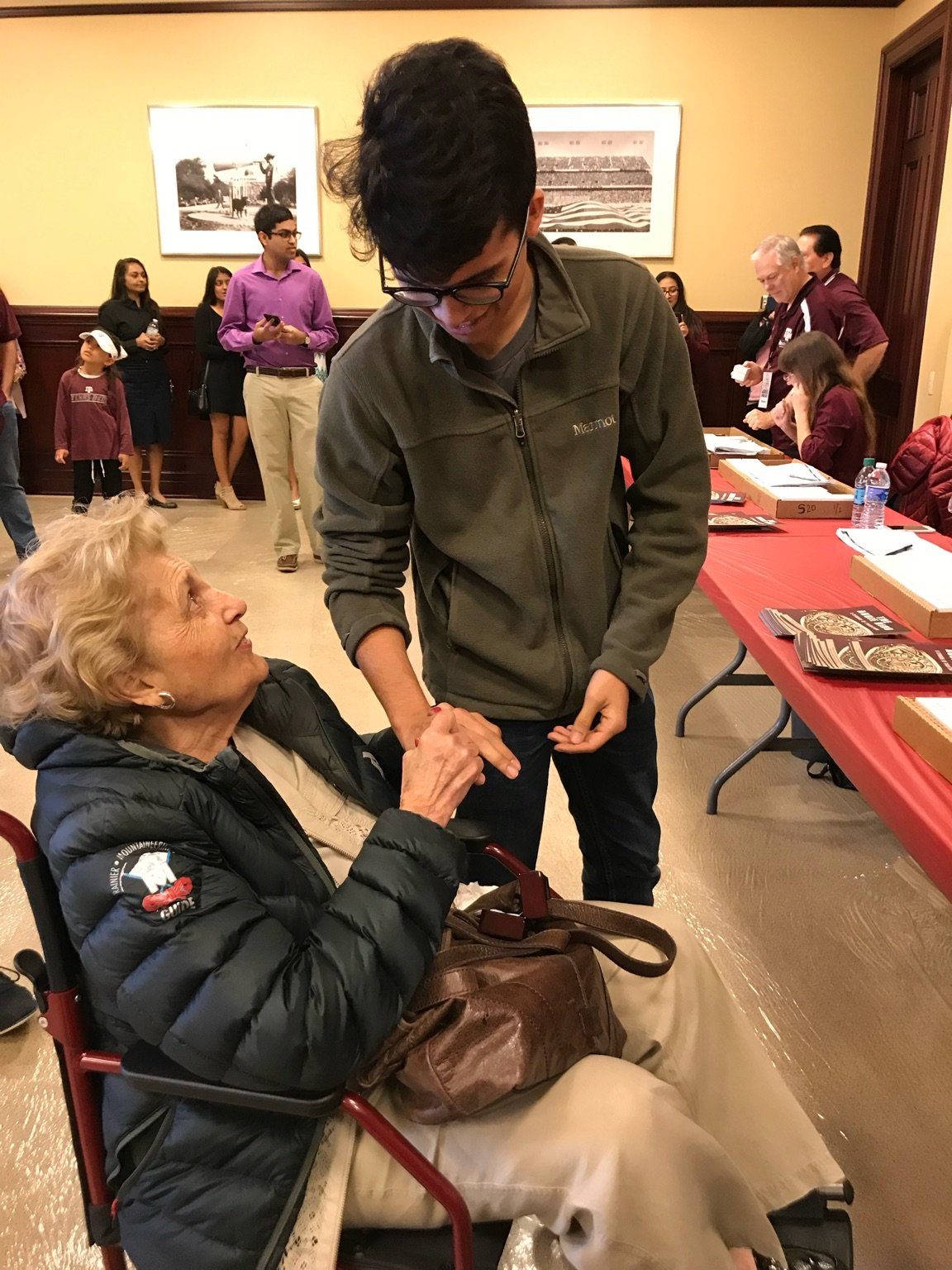