Last week I had the opportunity to attend the American Geophysical Union’s 2017 Fall Meeting in New Orleans, Louisiana to present research I have been conducting under Dr. Denise Kulhanek of Texas A&M University/The International Ocean Discovery Program. I want to share some of my thoughts about the meeting, as it was my first scientific conference and it gave me a lot to think about. 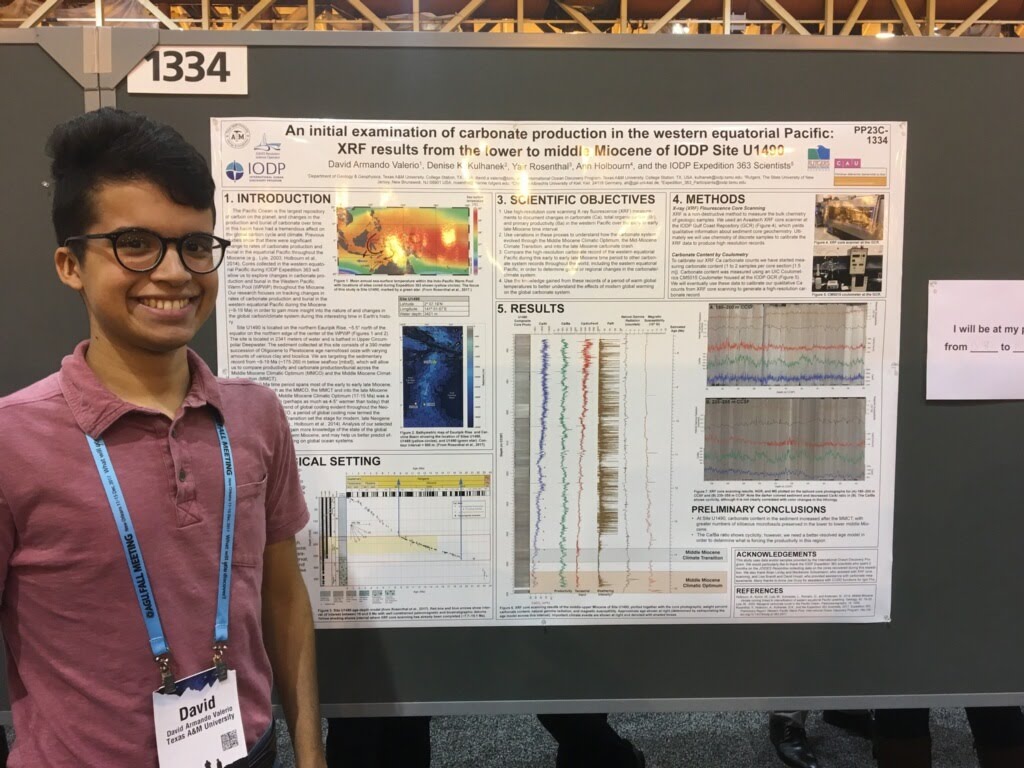 The American Geophysical Union is the largest Earth and space science organization in the world with over 60,000 members from 137 countries. This past meeting had, last I heard,something like 27,000 attendees. Attendees came from all points in their academic careers, including undergraduate students, graduate students, post-docs, professors, and research scientists. The attendees work for universities, national laboratories, federal government, industry as well as other entities. The breadth of scientific experience at the meeting was amazing, and it was invigorating to connect with so many brilliant scientists.

There was also a tremendous variety of disciplines on display at the meeting. Earth science as a field is, in my opinion, the most interdisciplinary of the major sciences. In order to attempt to describe the Earth system, knowledge of biology, physics, chemistry, mathematics and geology is necessary. These disciplines, in addition to innumerable sub-disciplines, give geoscientists the tools needed to try to describe the Earth system with as much detail as possible. The meeting featured scientists from all of these sub-disciplines, a lot of which I had little prior knowledge about. 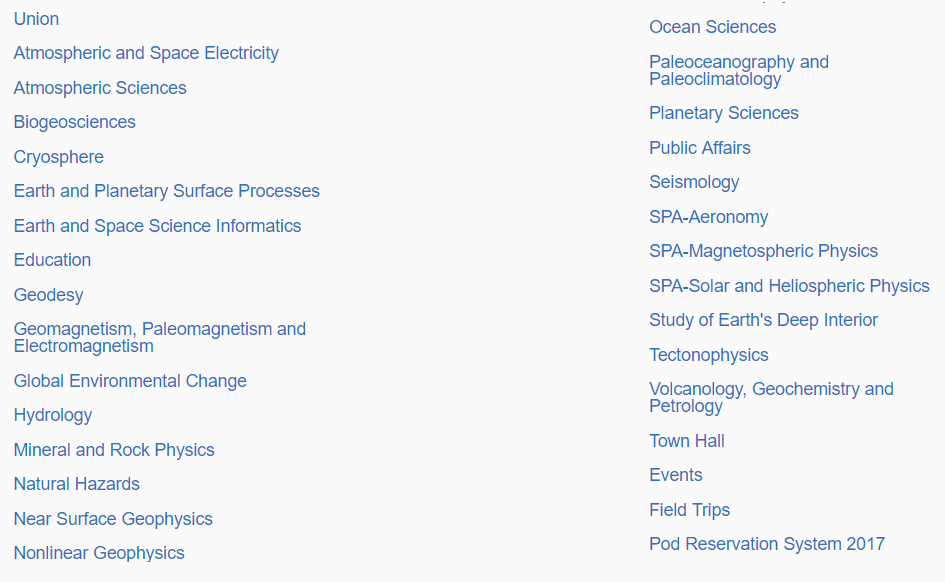 I’ll now explain the basic set up of the conference. It was hosted at the New Orleans Morial Convention Center, a huge building that is about 1 mile across on its longest side. Lets just say there was a lot of walking involved. The conference itself was from Monday, December 11, to Friday, December 15. The scientific program lasted from 8 to 6 every day and consisted of two types of events, oral and poster sessions. Oral sessions were 2 hours long, and consisted of scientists giving 15 minute presentations on research related to a selected topic. An example of a topic was session focused on “Evaluating Tectonic and Volcanic Forcing of Earth’s Climate”. Poster sessions were 4 hours long, usually related to oral session topics, and allowed for more in-depth explanations of research as well as interactions with the scientists behind the research.

The posters scheduled for sessions were kept in the poster hall for the full duration of the day, to give as many opportunities for viewing as possible. Presenters were often at their posters for about 2 of the 4 hours dedicated to their session, making it somewhat a game of chance if you were actually going to be able to meet the scientist behind the poster. The poster hall and its various sessions was really something to see. They must have connected about 3 or 4 huge ballrooms to accommodate all of the posters. The posters were organized by section and filled the whole of the massive room. The atmosphere was really something new for me. It was gratifying to be in a place filled to the brim with all sorts of science, and to be able to stop at any poster and learn something new.

My research with Dr. Kulhanek uses sediment cores taken during the International Ocean Discovery Program’s Expedition 363 to the Western Pacific Warm Pool to reconstruct changes in the western equatorial Pacific carbonate system during the Miocene (~9 to 19 million years ago). The Pacific Ocean is the largest repository of carbon on the planet, and changes in the production and burial of carbonate over time in this region have had a tremendous affect on the global carbon cycle and climate. We are focusing on the Western Pacific Warm Pool because it is widely believed to have a large influence on global climate, but has not been studied as much as other regions of the ocean because many climate proxies are hard to use in its extremely warm waters. 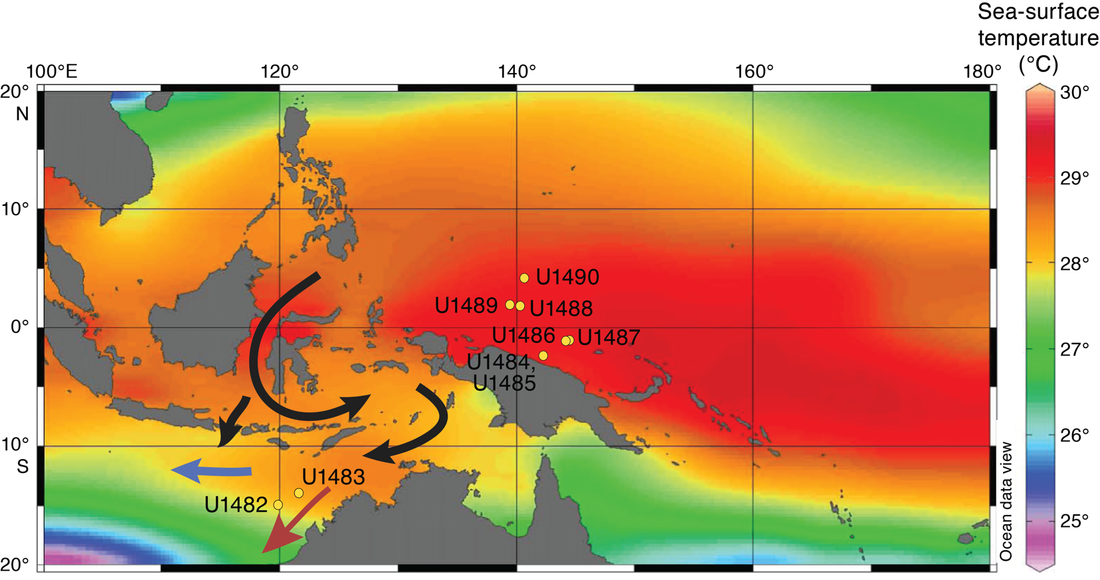 My poster showed preliminary X-ray fluorescence (XRF) bulk geochemistry data we measured at IODP’s XRF lab last semester, along with shipboard measurements taken during the expedition. The data produced from XRF is semi-quantitative, it gives out element content in counts per second which isn’t very useful for analysis. In order to use the data we took ratios of different elemental proxies to calcium/potassium to convert our not useful raw XRF data to useful quantitative element ratios. We used this geochemical data to show changes in carbonate content (crucial to understanding ancient climate systems), paleoproductivity (a measure of the amount of life in the overlying sea), continental input (sediment from islands) and weathering rate during our selected time period. The main conclusion from this preliminary research is that we still have work to do.

Nonetheless, presenting my research at AGU was tremendous fun. I presented in the “Paleoclimate Variability in the Indo-Pacific Region” poster session for about two hours, and got to meet a lot of great scientists. Most of the people who came by our session had either sailed on Expedition 363 or were working with sites cored during the expedition. I got a lot of great advice about where to go next with my research which was great. It was a great experience to meet scientists from all over the world and be able to discuss my research with experts in the field. I also met Robinson Meyer, a climate and technology reporter with the Atlantic, who came by the poster. We had a great conversation about the state of science and science journalism in 2017 which was very enjoyable. He’s a cool dude. Overall, my first presentation at a scientific conference went very well and I enjoyed doing it.

I also had the opportunity to attend the International Ocean Discovery Program’s AGU Town Hall, where the various scientists from around the world involved with IODP hang out and drink beer. The meeting started off with the IODP Forum Chair Dr. James A. Austin updating the community on the state of the drilling program and the planned expeditions for the future. After this presentation the scientists got food and beer, then just hung out for a while. I got to meet a lot of great scientists there. I thought the meeting was a microcosm of the international nature of scientific inquiry, and invigorated my plan to continue work with IODP in the future.

I spent most of my time during the conference in sessions related to paleoceanography/paleoclimatology or volcanology, geochemistry, and petrology. This increased my certainty that my research interests are primarily at the intersection of paleoclimatology and geochemistry, which was reassuring. It was good to learn that what I thought I was interested in is actually what I am interested in. With this in my mind I added to my list of potential grad school professors those that are in line with what I want to do.

Overall, my first AGU meeting was great. I loved having the opportunity to learn so much about my field of study, meet so many interesting scientists and be able to present my research to the research community. Going to AGU has redoubled my determination to continue my research career, and helped narrow down what I am truly interested in. I’m grateful to my research adviser Dr. Kulhanek for being such a great mentor and giving me the opportunity to travel and present my research in New Orleans. Also, thanks to the American Geophysical Union for providing me with a travel grant to attend the meeting. I look forward to attending many future conferences.